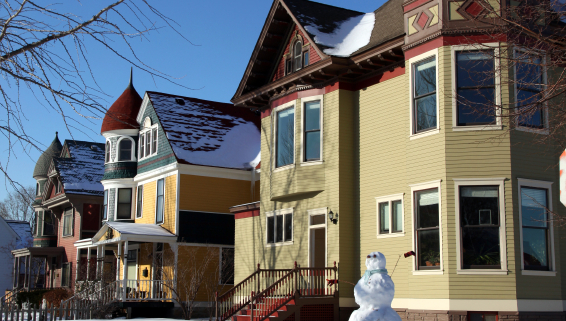 It goes without saying that Minneapolis and St. Paul construction projects have a lot to meet up to. Both in the Twin Cities and the state as whole, there are pieces of architecture and design that are truly something to behold. It can be daunting figuring out how to make your custom home exactly what you are looking for. So here’s a handy guide of some of the best homes in the area to help you figure out just that.

St. Paul is widely known for being a center of some grand and historic homes. Being the older of the Twin Cities can do that. Being the state capital only makes it more true. So, as can be expected, a tremendous amount of inspiration can be taken if one only walks down a classic St. Paul road. One of the more distinct ones would be the abandoned, but austere, Bardwell-Ferrant house. Boasting some peculiar onion domes such as you would find in Russia or Romania, this lovely home has a wraparound porch and two stories of pure history and class.

If you’re looking for St. Paul construction that is a little less odd, then look no further than the W.W. Bishop house. Looking like it comes right from the landscapes of New England, this home boasts wood siding, a tall brick chimney, and steep inclines on the roof for some quality weather coverage. But its most eye-catching detail is the distinguished medieval-style tower perched right on the front entrance, giving it a classic aesthetic hearkening back to European castles.

There is no greater comedian in the world than Mary Tyler Moore. Gaining fame during the 60s and 70s, this Minneapolis native filmed her TV sitcom right in one of the area’s most auspicious homes. With an effective fusion of old world charm and new world spaciousness, the Mary Tyler Moore home is definitely something you should look at for design inspiration.

Maybe you’re looking for something extremely modern, however, with minimalist design tendencies. St. Paul construction companies have a local model of the modern style, as well, with the classic and extremely distinct Marcel Breuer house. With only one story, flat walls and ceilings, and a stark presentation, this home may not suite your tastes, but it is the modern style. It is what is chic.

So if you need some help with design inspiration, look at these stupendous examples of St. Paul construction and architecture. There is no charge for simply looking and they can give you some fantastic ideas. Be sure to contact us if you need any advice on how to go about setting up your dream home for the cheapest prices and highest quality.

Though folks nationwide call Minneapolis and St. Paul the “Twin Cities,” they really couldn’t be further apart than they are. There are some definite differences between these two places both in attitude and architecture. So when you are a part of the Minneapolis construction industry like we are, it would behoove us to be familiar with these differences. But the common layman, in all likelihood, is not familiar at all. So let’s go over the building character of these two related cities and see what makes each one unique in its own way.

As the state capital of Minnesota, St. Paul has been around for a long time. The city is widely known not so much for modern style or convenience, but on more archaic ways of building which give the city a much older character. As a result, St. Paul construction needs to be focused more on maintaining the same level of sophistication that older styles are known for. In this sense, the grander the exterior, the better off you’ll be.

But at the same time, St. Paul construction needs to be done in such a way to maintain the same aura, as it were, of classicism without looking like a cheap reproduction. This can be accomplished in a number of ways, such as using period-accurate materials like wood shingles and siding, and more open interior floor plans with a focus on larger rooms. Stone can be used to tremendous effect as well for exterior walls as well as fences and property boundaries.

Minneapolis construction, on the other hand, is an entirely approach. Minneapolis is a city which emphasizes bold architectural choices across a wider space of time. Modern styles can be applied to new buildings in this city, in keeping with the artistic vibe Minneapolis possesses. Whatever your opinion is on modern architecture, it does lend a unique feeling to the city.

But there is one other thing which distinguishes Minneapolis from its twin. Minneapolis possesses a plethora of “prairie homes,” which are known for being single-story homes with wide open living areas and smaller secondary rooms like bathrooms and bedrooms. Prairie homes were invented in Minneapolis by Frank Lloyd Wright, who built two homes in this distinct style. So if modern eccentricity isn’t quite your spiel, quaintness and simplicity can fit in Minneapolis construction as well.

However you decide to build your custom home in Minneapolis or St. Paul, we will be there to help you out. Coty Construction is familiar with all the different building techniques you expect from a contractor as well as all the different materials which goes into making the home of your dreams. Be sure to contact us to find out how we can help you.